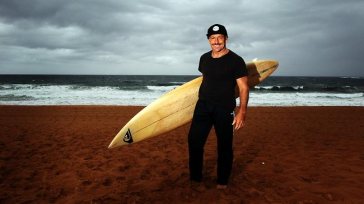 Surfed against Tom’s younger brother Nick in the 1979 Australian University Surfing Championships at Foster Tuncurry in NSW. He obliterated me in the heat in tiny 1 metre waves. Nick finished uni and went on to edit the magazine ‘Penthouse’ and several other publications. He recently produced the ABC productions of ‘Bombora’ and ‘Wide Open Road’. Brother Tom who watched the contest from the beach went on to become 2 time world surfing champion. I finished at Deakin and got on an oil drilling ship in Bass Strait, chasing the endless summer on my field breaks. Saw Tommy surf against Mark Richards in the Bells final in 1985 in 4 metre clasic waves. He was electric and MP was at his world championship best. Tommy and Nick were always together. Happy Birthday Tommy.
Peter F Hughes Saturday 25 Nov 2011

MAIN STORY
Story from the Age Newspaper, Saturday 26 November 2011
http://www.theaustralian.com.au/news/sport/fifty-years-young-tommys-still-firing/story-e6frg7mf-1226206554070
DOWN his driveway, past a jet-ski the size of a Volvo, around a real Volvo, four boards stacked in a rack on his garage wall, through a Hawaiian jungle of a garden to the front door. The firm handshake of a man’s man.

Inside, a white book case in the middle of the living room holds a copy of The Old Man And The Sea. Hemingway would have liked Tom Carroll: his rugged, weather-beaten skin, the squinting eyes like two ancient oceans, the brawling, barrel-chested physicality of one of surfing’s greatest watermen. Carroll is The Old Man And The Sea without the marlin or skiff.

Through an uninterrupted view of the ocean, Carroll watches a lone yacht fighting wild weather, fascinated and lost in thought: “Hope he knows what he’s doing out there.”

Two cups of tea steam on the kitchen bench. Carroll’s cat, Angel, takes the third stool. She watches him as he speaks. Is she listening?

Tell us about these 50 years, Tom. Tell Angel and everyone else about the stand you took in 1985 when you boycotted the South African leg of the world tour because of apartheid, when you might have gained a little respect, inwardly and outwardly, but when you virtually forfeited a third world title. Was it worth it? Did it make a difference?

“It made a difference to Nelson Mandela,” Carroll says. “I got to meet him when he was speaking at a function in Sydney. Bob Hawke introduced us. Bob told him about what had happened. Mandela looked at me and said: ‘Thank you.’

“That was an amazing moment for me, just incredible. He was such a humble man. The suffering he went through but he comes out the other side with a humility that draws you in.

“His aura, it makes you feel like you can be open and honest with him. He’s not trying to get away from you. You don’t feel like he’s paying you lip service. You have his whole attention. You know, I wasn’t trying to change the world. It was just a very private decision, an expression of how strongly I felt at the time.

“I didn’t want to be involved in supporting apartheid. I wasn’t an activist. I wasn’t waving around placards and making speeches. I just believed it was wrong and wanted to highlight how we, as human beings, were behaving. If it made one person think more about it, well, mission accomplished. My conscience wouldn’t let me go, and I’m glad I didn’t, but it came back to bite me a bit.”

Third world title be damned. He already had two, from 1983 and ’84, and was surfing’s first million-dollar man when Quiksilver handed him a big, fat sponsorship deal in 1988. His trophy for being inducted into the Australian Surfing Hall of Fame in 1990 is in the white bookcase — next to Mandela’s Long Walk To Freedom. The only other trophy in the house is near the TV, commemorating his stirring, heart-rending win at the 1987 Pipeline Masters the day after his sister died. Carroll won 26 titles, third only to Kelly Slater and Tom Curren.

Back in the day, it was more than what he did, it was how he did it. The bravado. The legendary “Tommy Gun”, Gath helmet strapped to his head, shredding life-threatening waves on boards shaped like fibreglass bullets with a stripe swathed across their decks. The bible of the waxhead demographic, Surfer magazine, rates him No 7 on the list of greats.

He was a super-fit pocket rocket, a walking, talking advertisement for the size of the fight in the dog.

He gets a phone call. Angel leaves. Phone call over, she returns. Really, is she listening? Carroll’s triumph at Pipe in ’87 was up there with the most emotional, fearless and commanding victories pro surfing has seen. Less than 24 hours earlier, Carroll, then 26, was told his sister, Josephine, had been killed in a car accident. Carroll told no one. He entered another realm. An other-worldly indestructibility washed over him until he had finished attacking Pipe like no one had ever done, until he had won his first Masters trophy, the one now taking pride of place in the living room, and dedicated it to the sister he would never see again.

“Yep, I lost my sister,” Carroll says as if he still cannot believe it. “Just such a shock — anyone dying in a car accident, a death like that, well, how are you supposed to react? I had no idea. I went into this other world. Everything became trivial, everything.

“I paddled out the next morning and it was big, serious Pipeline. Really thick and heavy. I didn’t care. I didn’t even look at the break until I got out there.

“I’ll never forget that morning. I had a confrontation with a surfer who was a particularly unpredictable kind of guy. He was kind of dangerous. Normally I would have been intimidated but I didn’t give a stuff. He put me in a really, really horrible situation on a big wave — pulled my leg rope as I was paddling, so I got pitched over the falls, straight on to the reef. That was my first wave of the morning. I told the guy what I thought, and he was sort of backing off. I’d never seen him back off. There was something in that. That whole day.” Angel jumps on to the kitchen bench, right in front of Carroll.

“I was in just another zone. I was driven by something outside of my normal way of thinking. I had this overwhelming sense that I could do nothing wrong, that someone or something else was pushing me along. It was a really emotional day. I lost my mother (to pancreatic cancer) when I was eight. Losing my sister was a double-up to that. I wasn’t ready for it.

“I can really relate to anyone achieving something great after the death of someone they cared about, especially someone in their own family. A whole other driving force comes over you, an incredible gift from the person who has died, a beautiful gift from them.

“They come along for the ride, they sit beside you for that day, they inspire you and help you out..” Angel has heard enough. She jumps off the bench and runs to the front door. It’s time to say goodbye to Hemingway and the The Old Man And The Sea and the young-at-heart man turning 50.